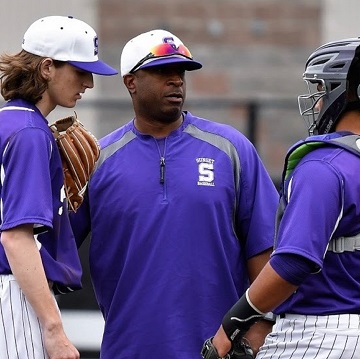 Veteran Sunset High School assistant varsity coach Kevin Lovings has attended over 25 NWBCA conventions. For Kevin, it’s about planting the seed in his players to go on and one day be great coaches themselves. To do that, he’s convinced you have to make connections and be informed, and he gets that at the NWBCA.

Lovings has been coaching since 1992 starting at North Salem as an assistant with stops at Roosevelt High School in North Portland as a head coach, at Sunset in Portland for a spring as the head coach of the Metro League champions in 1999 to back to coaching with the Apollos again in 2015 to the present. He was a collegiate assistant coach at Pacific University in Forest Grove, Oregon from 2003-2014.

“Nowadays, social media is the connection between coaches,” said Lovings. “It’s great to be at the convention and get a handshake from those coaches and be able to meet face-to-face, which helps further build relationships.”

One thing coach Lovings really enjoys is seeing the full circle of coaching on full display at the NWBCA, as he enjoys connecting with former teammates and coaches like Randy Rutschman and Dale Stebbins. He also enjoys catching up with former players that are now coaches, which brings him great pride.

He’s also a regular attendee because it’s one way to gauge his program’s instruction against peers and he always wants to see how things are being taught at the higher levels.

Kevin highly recommends young coaches attend the NWBCA convention to learn, to incorporate new concepts & drills and to soak up all the info.

“Young coaches should formulate questions before hand and not be afraid to ask questions or to follow-up with presenters,” said Lovings. With that said, he appreciates that the younger coaches coming up don’t mind taking risks or putting info out there.

Getting 1% better at instruction each season is one of coach Lovings goals.

With his growth mindset, Kevin is developing future coaches, getting better each year and enjoying the full circle of coaching that is accentuated each January at the convention Jerry Gatto built.